American Elms are lovely trees that have been hit hard in recent decades by Dutch Elm disease, a fungal infection that has killed millions of trees in the United States. Our family farm had dozens of them in the woodlot and surrounding the yard, and one by one, they also succumbed. This bowl is from one of the last to go. 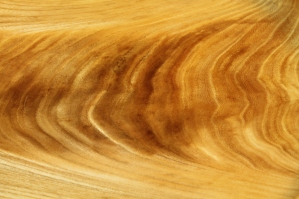 The crotch figure in this one looks to me as if the grain has been melted and sagged.

Last summer, a severe wind storm hit the Pick City, ND region, where my brother-in-law’s family has a lake cabin, and a small chokecherry tree (prunus virginiana) on their property snapped off. My BIL and nephew yanked the root out with a pickup, and before they could throw it in the firepit, I said “I can make something from that.” And I did.
Almost everyone who’s seen it so far has said it looks like a bear paw. 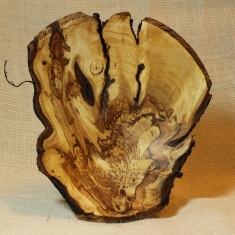 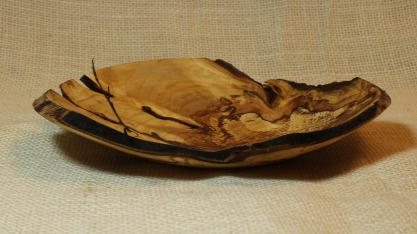 I added some pyrography on the edge. 8″, Danish oil finish.

American Elm with crotch figure and a little spalting.

Last summer, I took down a dead green ash tree in the woodlot on my family’s farm. The tree was in the neighborhood of 100 years old, but during an extended wet cycle about 10 years ago, it died when the water table rose too high and drowned the roots. Most of it was cut and split for firewood, but I saved the larger crotch pieces because the figuring in ash crotch is phenomenally vivid. I had sliced a slab off the side of one of the crotch pieces, and was going to just use it for firewood, but something stayed my hand, and a couple of days ago, I decided to cut a bowl blank from it and see what came of it.

It was the largest diameter blank I have yet attempted, and it was rather lopsided when I started, so I had to take it slow until things were balanced better. Here’s a look at the bottom after I had it shaped and sanded.

And the inside (plus some detail of the bark rim): 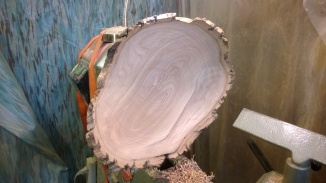 Here it is after a couple coats of Danish oil, which brings out the grail beautifully: 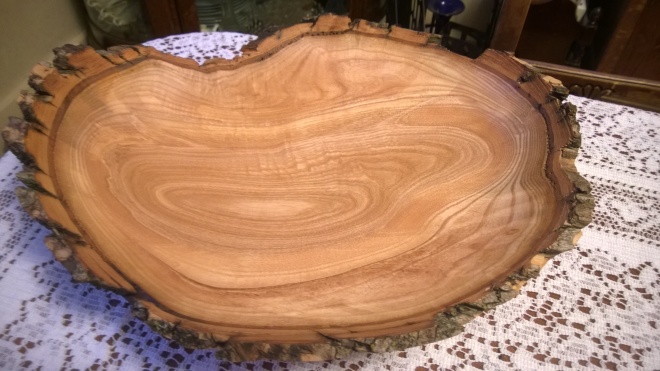 …and now you’re likely singing that song in your head: “The worms crawl out…”

Seems fitting for this bowl.

There’s a lot going on with this one. It’s maple–I’m afraid I’m not sure what specific type, but likely either Sugar Maple or Silver Maple, as both are native to North Dakota. This tree was standing dead in the woodlot on my family’s farm, and I cut it down this fall for firewood. However, there was a likely looking crotch about 20 feet up, so I sliced it open to see what it had going on.

Bingo! Not just some nice crotch figuring, but also plenty of spalting, and some beetle larvae tunnels. There’s an old saying among woodturners: “If you can drink soup from it, it’s a bowl. If you can’t it’s art.”