Buckthorn (Rhamnus cathartica) is a non-native and invasive shrubby tree in North Dakota, and it’s making a nuisance of itself in the woodlot at my family’s farm. This bowl came from a sizable crotch piece that I cut and turned last fall, and finally sanded and finished last week. The wood is lovely, but it has a tendency to crack badly as it dries; this piece was no exception, and I had to fill several cracks with cyanoacrylate glue and sawdust. 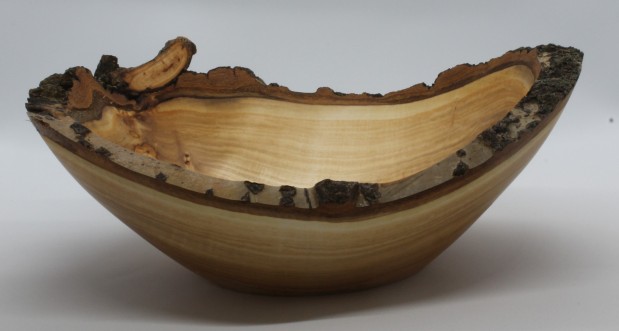 Last summer, some of our friends had a large poplar branch come down in their yard during a wind storm. I offered to help with the clean-up, and brought home a couple of chunks. Here’s the result.

There’s a bunch of tight curl figure on this one, but it’s hard to get a picture that does it justice. It’s much more vivid than this in real life.

Here’s the one from the other side of the log.

This is just a bit smaller: 8 1/2 inches tip to tip. Both have had a couple of coats of teak oil and have been buffed to a satin finish.

American mountain ash (a member of the rowan family) is a common decorative tree in our community, but it’s susceptible to disease if it’s injured. A neighbor was slowly losing theirs, so my wife volunteered me to take it down for them. 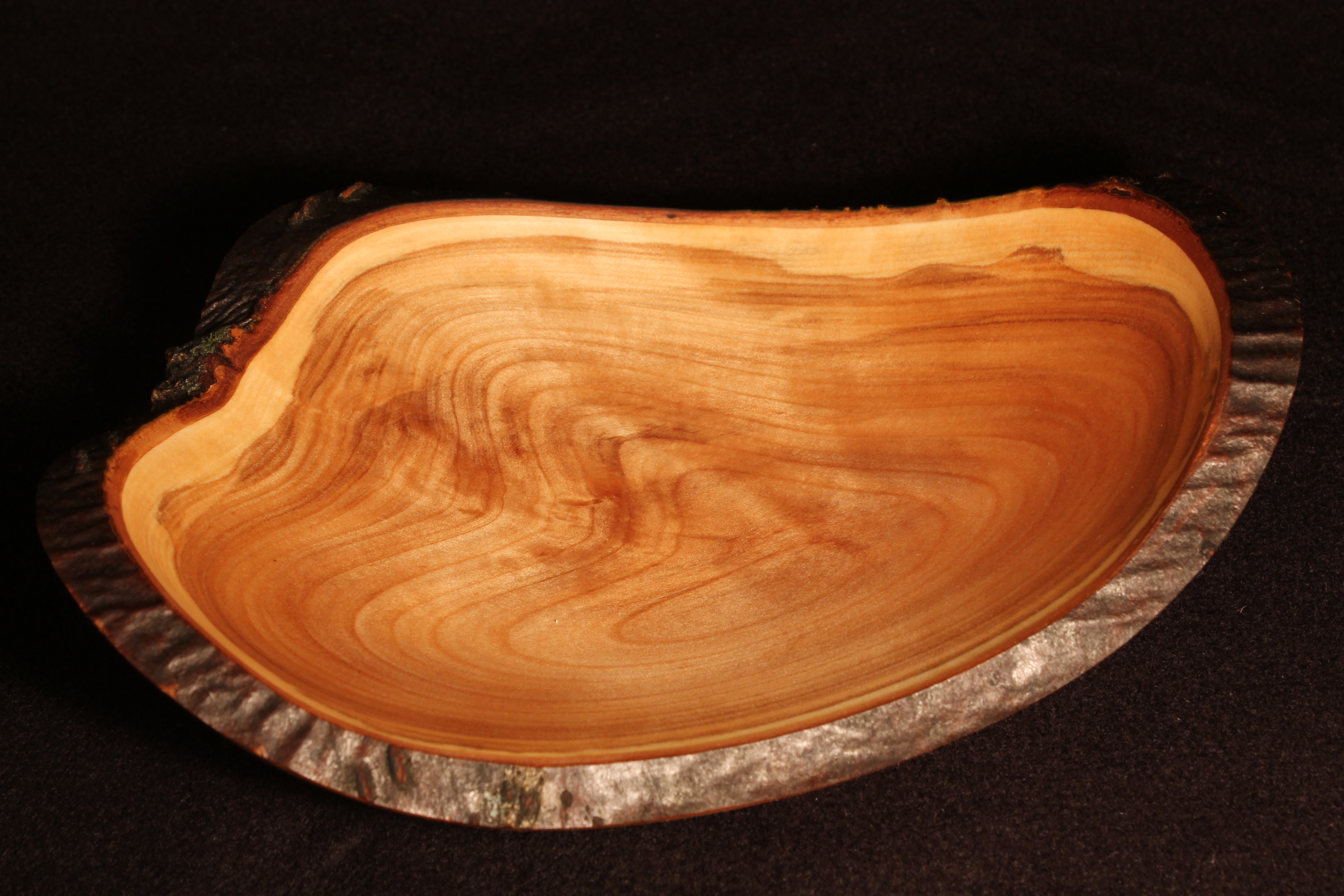 The branch this one came from was about 7 inches in diameter, with a smaller branch coming off the side, making for a mitten-shaped bowl. (I like the oddball ones like this.) The wood cut nicely, so I’m looking forward to doing more of this stuff.

Many of you are familiar with the First Rule of Holes: “When you find yourself in one, stop digging.”

You might now know, however, that there is a First Rule of Bowls: “Never make a bowl bigger on the inside than it is on the outside.”

I broke that rule this morning.

This is a bit different from the silver maple bowl from a couple of days ago. In that case, I broke the tenon broke off because the wood was not sound. In this case, I just cut too much out of the bottom of the bowl.

So now it’s a lovely natural edge American elm funnel. Or lampshade. I’m not sure yet.

My wife and I spent some time visiting family in the Dallas-Fort Worth, Texas area the week before Easter. While walking in my brother’s Grand Prairie neighborhood, I found some chunks of an unknown species of wood sitting on the curbside, waiting for the garbage pickup.

I’m not one to turn my nose up at free wood, so I grabbed a few chunks. After some research, I determined that it’s redbud (Cercis canadensis). It turns beautifully and takes a nice finish without much fuss.

The logs I took were kind of knobby, hinting at some possible burl-like figuring. Here’s a closer look at the figuring that I found.

I mentioned a few days ago that chokecherry was a joy to turn. This is what I was working on: just a little natural edge bowl with a round bottom hence the “rocker” name. (Bowls like this are sometimes called “banana” bowls.) 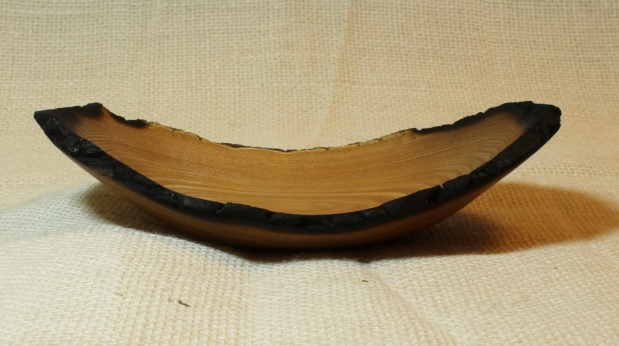 A natural-edge boxelder bowl–it still needs to be sanded and have a finish applied, but it’s still pretty moist, so I’m going to let it season a bit first. And yes, that is moss on the bark.

I have a few more pieces of this mossy stuff. Should be fun!

I have a couple of green ash crotch pieces in my woodpile, so I sliced them open a couple of days ago to see what the figuring was like. Here’s the first piece, mounted on the lathe. Step one is to flatten what’s going to be the bottom and turn either a tenon or a recess on the bottom for the chuck to grip once you get the basic outside shape made.

Then you start peeling away the shavings, forming the outside. On an irregular piece like this, you have to slow the lathe down, because the wood is unbalanced.

Turn it too fast, and things start vibrating, which is a kind of excitement I don’t need. This shot shows the piece from the headstock end of the lathe, which gives you an idea of the overall orientation of the trunk and branches on this. (This tree was standing dead, and all of the bark had fallen off. The wood itself was still perfectly sound, though.)

After getting the outside shape defined, I sanded it to 400 grit, and then flipped it over and started hollowing it out. After getting more wood removed, you can start speeding up the lathe, and things begin moving a little faster.

And here’s the finished bowl, sanded inside and out to 400 grit, and finished with two applications of Danish oil. I call it a Heart bowl, because the overall shape is like a heart–more anatomical than Valentine’s Day.

Here’s the finished product from that chunk of charred green ash. I really had no idea whether or not this was going to work–whether the wood was going to be any good, whether the charred edge would hold together–but I’m pleased with the result. I left this one pretty thick, not knowing how the wood would behave, and I kind of like showing off the edge this way. I have a couple more pieces from the log, so I’ll try to make the next one thinner. 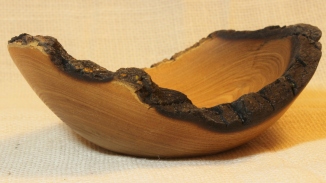 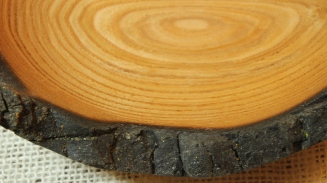